What kid from the 1970’s DOESN’T remember the women of Star Trek? Every episode featured not only smart and sexy female regular characters among the crew, but also exotic sometimes alien women that the Enterprise would encounter each week. For no real reason I’ve chosen to start with an Alien. In one of my favorite episodes, ‘A Taste of Armageddon” we see both one of the very best dystopic  societies Star Trek ever presents in  Eminiar 7 as well as a bunch of Continuity issues in regards to the level of benevolence and interventionism the Federation is willing to exercise. An aggressive humanitarian stance is the only motive mentioned for the ‘diplomatic mission’. Vague mention is made of the need for a “Treaty Port” that would have saved “thousands of lives” in the last half century, so maybe the Federation is just exercising old fashioned and highly aggressive “Gunboat Diplomacy.”

The episode features the annoying and fiery Mr Fox, Special Ambassador from the Federation, aboard the Enterprise on a mission of Diplomatic Intervention designed to force a treaty on the planets Vendekar and Eminiar 7, their destination, for rights to the aforementioned Treaty Port. Fox can and does over rule Kirk and later Scotty, as he is highly and lawfully empowered by the United Federation of Planets to do anything to achieve the missions goals.  These goals are completely at odds with the Prime Directive, which stresses Non Intervention, but hey,it’s season 1 and the Star Trek lore isn’t fully established yet (for example Spock also refers to himself as “Vulcanian”). 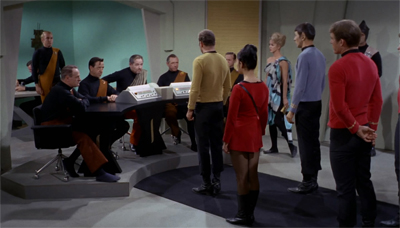 Unknown to the Federation, whose first contact attempt had ended with the ship listed as lost a half century earlier, the two planets have somehow managed to negotiate their vicious war into a surgical endeavor via transferring all tactical actions to an adversarial Real Time Strategy Game where theoretical attacks result in actual casualties with those classified as victims willingly reporting to Disintegration Booths spurred on by an innate sense of duty and order. Those traits and some jaunty fashion choices are the only differences we can see between humans and the Eminians. Theres no makeup, brow ridges,etc. They appear as earth type humans.

Kirk, already dealing with Fox intense drive to contact the planet despite being strongly warned off, prevails upon the Ambassador to allow him to make First Contact. He beams down with Spock, Yoeman Tamarand and two red shirts to beautiful, prosperous Eminiar 7 and sees no trace of war. Even  tricorders and ships sensors reveal no trace of conflict. After meeting Mea 3, who assures them they are indeed at war with Vendekar, they re taken to

the Concil War Room where Anan 7, council leader, and several other council members await testily. He demands the Enterprise leave immediately and refuses diplomatic relations. Kirk begins explaining to him that the Federation is going to be part of the future whether they want it or not, because, hey, we’re way more advanced.

Suddenly one of the theoretical ‘battles’ begins, causing massive ‘casualties’ and ‘Destroying’ the Enterprise (hypothetically). A frustrated Kirk is told that for the greater good he and the entire ships compliment, as well as tens of thousands of Emenians will all hop into suicide booths. Anan apologizes and gamely offers to return the Enterprise (for deposit?) to the Federation. Irritated, Kirk doesn’t bother playing games. Pointing to his superior technology, well armed warship and  highly trained and battle tested crew he confidently promises the total destruction of every city on the planet in a very un-Federation like move. At this point he’s sounding more like a Klingon or Mirror Universe Kirk than any Starfleet Captain.
Mea 3 is the beautiful assistant of the leader of the planet, douchebag liar and video game junkie Anan 7, a functionary with a deep appreciation for the savage nature of his race (and that of the interloping humans who blew off a warning to stay away.) Its Mea who initially greets the landing party, sadly aware of the danger they have thrust themselves into.

The ironically perfectly named Anon knows how to be savage and cold, but only kills by remote control and his ‘victims’ are cheerfully willing. As a leader he’s openly rudderless and opts to go underhanded to stay at war. He whines openly to his fellow council members about what a terrible leader he is. The fact he is running this place with zero vision or charisma may be another way the writers are trying to show the docile, orderly nature of the Eminians. They simply fall in line.

Anon 7 is a truly evil prick who is simply overmatched and out savaged by Kirk and the Crew, who practice straight up war all the time. He ham handedly tries to fool Scotty, in temporary command with McCoy in semi executive role.

After its clear his rouse failed Anan decides to attack the Enterprise outright with even less success than his attempts at deception. He continues to attack the ship to no avail, with a  capable, aggressive Scotty  several steps ahead the entire time. Later he foolishly tries a straight up shakedown, perhaps projecting the locals sense of duty on to the Enterprise. Contacting the ship with Kirk in the room gives Kirk the chance to call out to Scotty “General Order  in 24 hours!”. Shockingly, the benevolent United Federation of Planets doesn’t even make it to 25 before their “General Orders” include going Death Star on any planet that crosses them or pisses them off. It just doesn’t square woth later episodes and the assertion they’d die before interfering, a concept that was out the window in the opening sequence.

After the attack on the Enterprise Fox and Scotty clash when the later, fed up and ready to show the power of the Enterprise, decides a few photon torpedoes might just get his point across to the Emenians. Fox makes contact with Anon, and gets a pack of platitudes and lies which seem to reassure the otherwise canny Fox. The final straw comes when Scotty refuses Fox order to drop shields (Anan is seen ordering an immediate attack as soon as the shields are down) as a sign of good faith. Scoffing at a threat of jail Scotty backed by McCoy have the Enterprise assume an attack posture via attaining a higher orbit as Fox and his assistant storm off to venture down to the planet for negotiations and are promptly scooped up for execution, albeit with a deep apology from Anan.
Mea 3 is played by TV stalwart Barbara Babcock. She’s tooling for Anan dressed to kill in yoga pants and a drape strategically wrapped around her. A platinum blonde and complete stranger to modesty she never gets with Kirk or anyone else and is not overly passionate about anything outside her duty, even when that’s as grim as hopping in a suicide booth to be blown to bits, depriving her planet of her super flat stomach and alluring eyes.
On the other side of the coin Mea never gets slapped, punched, phazed or otherwise roughed up by Kirk. She gets off with a grab of the arm and a firm shove. Since this is to prevent her from dutifully committing suicide though we’ll give James Tiberius a total pass on what amounts to mildly accosting her.

Mea is pivotal in the episode. She represents everyone on the planet outside the political upper class (she’s merely a dutiful administrative assistant). She has to thread together some tough dialogue and very lofty intellectual plot elements as well as show the inner nature of her planet’s inhabitants. She’s also the test case for Kirk’s highly imaginative strategy. He’s annoyed and ready to kill and decided he’s gonna mind fuck and terrorize the planets government into negotiating an end to the 500 plus year war as well as establish relations with the Federation. She believably portrays how an essentially human type alien with an exaggerated sense of duty could buy into Kirk’s plan, as much as he reveals it, based on duty and trust. She flips loyalty and aids the Enterprise party in a violent raid where several Emenians get killed by the red shirts Kirk bought along, neither of whom manage to die, likely because after the initial escape they toss their uni’s and put on native dress.

The real target of Kirk’s plan are the instruments of the war, namely the Suicide Booths.
Shocked by the overt and frighteningly effective  violence prosecuted against the security forces by the now Raiding Party from the Enterprise she’s probably the first Emenian to start to believe they can maybe end this war. She may also be somewhat inspired by the gorgeous yoeman Tamarand, who takes a relatively hands on role in the whole operation too. For Kirk’s part, shes the first Eminian he bonds with (shes not trying to kill him, which helps). In her he sees the potential for the race to end the war as well as their alien form of ‘humanity’. She also betrays the level of duty and longing for order that are ingrained in her race.
The final showdown between Kirk and Anan takes place in the war room and is best seen right before watching Seth MacFarlane parody it.  Kirk and Spock then destroy the computers controlling the war simulation, a violation of the two planets agreement and a sure trigger for real hostilities.

It’s a great, imaginative episode with an unforgettable Trek Chick who maintains believability in a challenging role on preposterous sets (that we all simply love).

In the end she seems to be set up to take a leading role in the new society,which opts to allow Fox to remain behind and attempt a dialogue and treaty to finally, truly end the war.  Hopefully they throw Anon in one of the suicide booths before they retire them.

As the Enterprise prepares to leave orbit Kirk, Spock and McCoy, together for maybe the first time in the episode, remark on Kirk’s strategy on the bridge. Kirk explains he took a ‘calculated risk’, betting a small, highly violent intervention would be a wake up call to the inner fear of the chaos and horror a real war would visit upon them and spur negotiations. Had he failed, well, they had already been at war amassing 3 million deaths a year, so nothing would really change.

Fox’s final report, via subspace radio from the planet is prospects for peace appear promising. 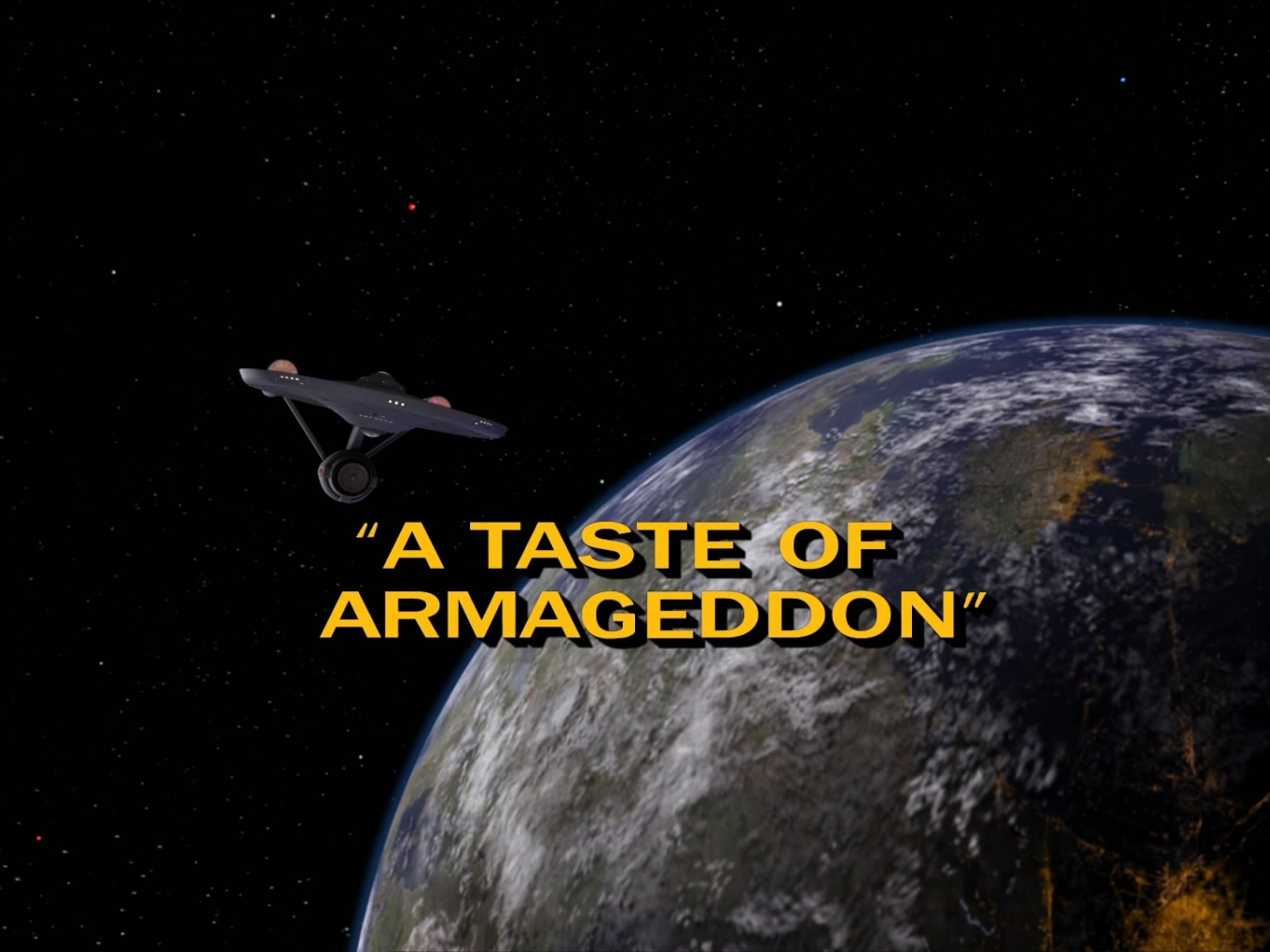