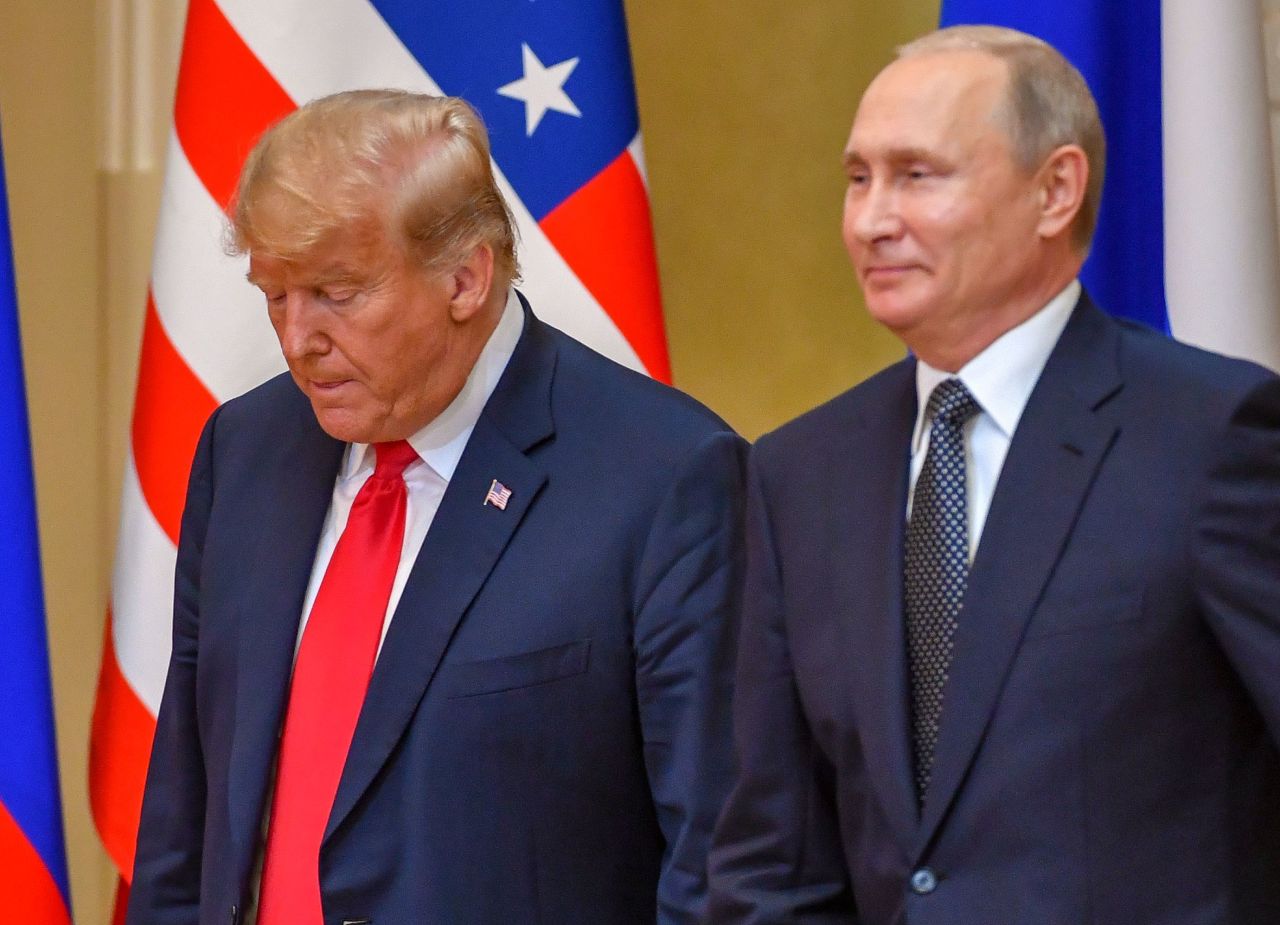 UPDATED- No one thought the Trump- Putin Summit in Helsinki was a good idea. People were even a little more sure Trump should NOT meet alone with Putin. No one got what they wanted. Trump defiantly went to the Summit in spite of a series of actions by Special Counsel Mueller that showed deep Russian interference with the 2016 US Election and continuing “meddling” (apparently Meddle is the new word for “Attack”) in this nations elections.

Walking out to meet the world press it was obvious the threats and promises of destruction should Trump get out of line from Putin had deeply effected Trump.

Whether Putin pulled out his cellphone and showed Trump some humiliating video, mentioned that the Election results had been tampered with (which is more and more likely) or any number of other possible compromising acts that deflated the usually puffed up and animated Trump, is anyones guess.  One things for sure Trump looked like guy who was just shook down Mafia style.

The only things that were the same as always were his insincere tone, frequent lies and distracted delivery. A fidgeting, fumbling mess who we know now was admittedly tongue-tied by Putin’s “brilliance” he stood before the world, a fat man in a billowing suit covered with orange body paint just babbling. Lurching awkwardly from attacking Hillary and Obama to agreeing out of hand with Putin’s denials, it was a Trump Shit Show like no other. No disparaging words for Putin at all as Trump blamed ‘both countries” in a Charlotesville-style “Have it both ways” Bullshit line.

At the podium Trump sounded deflated and outright beaten while Putin was in his glory, feeding lines to the American president he had created and compromised. Like a sign language chimp who lacked subtlety or nuance, Trump trashed America to please his master. Right up to the moment he literally played ball with Putin (with  world cup soccer ball) Trump showed he would totally PLAY BALL in every way with his Master. To make it a little worse-as far as the soccer ball; who gives a gift from a poisoner to their son? But i digress.

Perhaps in the moment of deepest insanity trump suggested Mueller go to Russia and listen in on the FSB ‘questioning’ the people indicted the day before and, more fantastically, praised a suggestion by Putin that his investigators come here and look over Mueller’s files. The man sounded like a naive idiot and a Traitor.  So much for Trumps repeated boasting he doesn’t need to prepare for meetings.

In stark contrast; Putin stood before the world as its most ruthless super criminal and the greatest blackmailer in all of History.  If it was a boxing match it was Mike Tyson versus Peter Hurricane McNeeley. Trump should have sold advertising on the soles of his shoes the way he went down and sucked carpet in his glass-jawed confrontation with Putin. The one time boxing promoter all but threw in the towel. This was no WWE fake fight, even if the ending was pre-ordained. Trump got his ass kicked.

The numbers were already bad for Trump, who in most polls has over 50% of Americans disapproving of his actions. In most polls he has about 35-40% approval on his best day. Thats WITH an irresponsibly high tax cut bribing people every pay day. In other words- people really hate president Trump.

Today, in one of his show “Cabinet Meetings, the “president” tried reading a script of  poorly crafted lies in disinterested fashion.  He mentioned that he has simply misspoke and was actually tearing in to Putin and we all just missed it. It wasn’t the least bit believable and left dozens of other terrible statements from Helsinki unaddressed.  It may have made things even worse.

In a bizarre dissertation to the media, which included a brief blackout in the room whih provided some strange images for a moment; no questions from press and ended with an extra harsh “Its over! GET OUT!” from the White House Communications staff the moment it concluded. They have learned that the president will blow up his own cause on his own with the ‘throw away added on lines” that have so marked his presidency. It was already too late. Trump went off script in his ‘correction’ and repeated the disproven notion that ‘it could have been anyone” who hacked the election in an ad lib tacked to the end of the very same sentence in which he said he accepted it was in fact just the Russians.

during the bizarre blackout

Trump has still not ever addressed the American People in any kind of fireside chat or Oval Office address. He has not held a Q & A with the media since February 2017 when he defended General Flynn (who has since admitted to treason) as ‘a nice guy’ and a ‘victim’.

This was a big deal. The last 24 hours have seen the Trump presidency’s unsustainable trajectory finally starting to erode.

Weeks later, at the end of June one thing the two “leaders” seemed to have spoken of was an awful idea to have Putin come to DC in time to be around to gloat when I guess they figure on hacking the Midterms. Watch this angle

Since coming home he sounds like he has been talking to Putin every day and the Kremlin and White House have identical messages. Trump hasn’t seen fit to tell anyone what the two discussed. It’s creepy and UnAmerican.

Whispers of some terrible concessions by Trump have leaked out, from the Russians of course, who always Punk Trump. He hasnt gotten at all upset about that, like say when he blew up at Justin Trudeau (on twitter of course, no way Trump has any backbone in person) for no real reason over some kind of betrayal of trust about their meetings thats likely all in Trumps head.