As a fan of the original I was still hoping the shattered pieces of the once sure-thing movie with Matthew McConaughey would be picked up. No such luck but since Hollywood can never leave a once successful idea alone we now have a new re-booted Magnum TV show.

If you’re a Magnum purist forget it, read no further. You’ll probably find the tone just a bit too trite and the female Higgins concept blows apart one of the best aspects of the original show, specifically the tension between Magnum and Higgins as two people who were never gonna get drunk enough for a night of sex, which the current two seem destined for. From what I saw the idea the writers can milk any fun out of the characters seems remote.

How they stayed on the air and that season 4 is on the CBS schedule for fall 2021 is beyond me. Things were obviously not looking good when they intentionally connected to to the horrible world of Alex Kurtzman’s Hawaii Five-Oh. Kurtzman Flunkie Peter M Lenkov helms this one, but its typical Kurtzman/ Secret Hideout garbage.

Maybe this show surived because other the dismal performance and cancellation of other Alex Kurtzman/ Secret Hideout shows like Clarice and their MacGyver reboot left the network short on programming. This iteration of Magnum PI is as bad as Star Trek Discovery (lowest rated scripted show on CBS) and its obvious from the same people if you watch the shows.  Alex Kurtzman and his hacks like to do things in ways that are all too familiar.

The idea they cant create is in their DNA. Hatched from JJ Abrams ‘Bad Robot’ Star Trek mess; they started out as intellectual poacher. They co-opt a successful idea, but with no respect for the characters or fans.

The shows are always pale shadows of what we had. The pilots may or may not be watchable, but usually that the peak. Then the plots circle for most of any given episode. Limited cause and effect are present. There’s lots of cheap shortcuts to move us through the hour and then they just rush to the end. Lots of things that should have implications are brushed off with a line-at best- or more often, just dropped. Kurtzman is not big on things like coherence or consistency in an episode, let alone series continuity. The “Gem” was Hawaii Five-Oh, which is awful- but safely walled off from rating issues by MNF it just eked out a bunch of seasons without ever being good.

The Cast is not bad but sadly thats about all this show has ever had going for it.

Where’d it go wrong? Well, once again these bad writers found themselves in a spot where everyone ratings are goung to be affected  – Monday Nights – where NFL Football managed to lower expectations enough for Hawaii Five-O not to get cancelled despite being horrible (for all the same reasons). UPDATE- Havaii- Five Oh, Clarice, the bad MacGyver reboot are all gone from the airwaves, never ever having made sense or garnered many viewers.

The network perhaps developed an outlook toward counter-programming against football that could only produce mediocre TV. It’s best summed up as “Dumbed Down Detective Shows that make NCIS New Orleans look innovative are fine because we get to have something of a second premiere for every episode AFTER MNF’s season ends.”

The logic seems to be – after January rolls around men will watch for the first time and the wives and girlfriends will watch it again. Down the line its well set up for really good ratings nights when the game is all but decided early or just a bad matchup. UPDATE- Didnt Work

The attitude over at CBS seems to be “We can float sub par shows using an attractive cast and bad stories will be evened out by using LOTS of gun violence as a crutch.”

There’s probably an entire blog post on just how much consequence free gun violence this show and Hawaii Five-Oh throw into any given episode in after-thought fashion.

Back to the Future

The good news of course is if you miss the 90’s we’ve got the shows back! CBS has rebooted a scat of  shows on a confusing Monday Night that have all been done better! Maybe the new Murphy Brown will work out and be a decent show, it’s too soon to tell. Also in the ether we’ve got a bad MacGyver reboot on Friday nights that’s in the mold of the new Hawaii 5-0. Which is to say – it’s bad.

Sadly the new CBS outlook means even the worst show is Bomb-proof. At least until episodes start to regularly do badly twice as the second airing is key to the formula. Throw in weird, bad “God Friended Me” on Sunday Nights and you can see there’s no real standards at the network anymore when it comes to any show up against the NFL. I would have hoped something more like an Twilight Zone re-boot, or a decent Star Trek show that was worthy of regular TV, but we get this drivel instead.

So the CBS writers are in a ‘reduced accountability zone’ and wow have they ever torn into it. Instead of something innovative or new theyve kicked back and thrown out some not so well thought out re-boots that seem to have picked up too much inspiration from The Fast & The Furious Franchise.

You would think that most of these shows would find their way and improve as time went by. Again, while it’s too soon to make a call on Murphy Brown, the lone non cop show entity, MacGyver and Hawaii 50 are bland and usually kind of bad with a cavalier attitude towards violence.

H50’s McGarrett has to be past 200 on screen kills at this point. So the anchor point of this formula was always ‘a low bar story-wise and heavily reliant upon consequence-free violence to move things along.’ 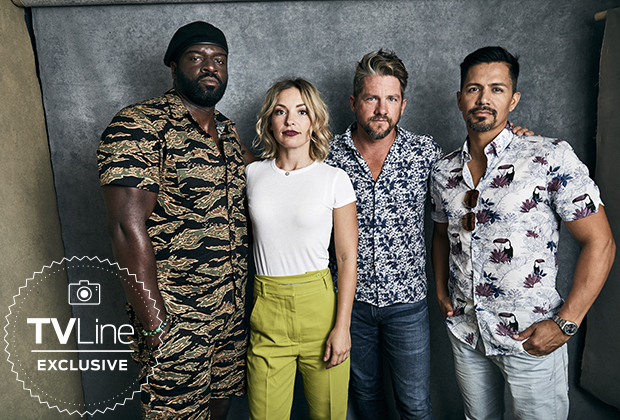 It all started with the awful Hawaii 5-0 reboot. The fact the shows up against Monday Night Football means that only women are watching it. Then the network gets basically a second premier of all episodes in January when Monday Night Football is over. So to keep men watching all dialogue is punctuated by long machine gun duels that I guess they consider substance?

One thing we knew going in was the chances of making TV history again with an innovative and fun show were not good. Still, if done right a Magnum PI reboot could still be watchable.

Watching the new Magnum show is best summed up as “Johnny Depp’s thoughts on geo-politics are probably about as interesting and relevant.”

We were told to be ready for some real changes in the format and they weren’t kidding. For one thing there appears to be no narration. The biggest change,  obviously, is female Higgins. I hesitate calling a Latino Magnum a real change. Furthermore, Jay Hernandez is better than okay and might flourish in a better show. Don’t blame him. He captures most of what we would want from Magnum and could get even better if the show lasts. The approach is respectful on this count.

While it may not have really started out that way the Higgins character grew to occasionally steal an episode. Accompanied by two loyal and extremely obedient dobermans; the original Higgins was a preposterous little man firing off a cannon while raising a Union Jack and scolding Magnum as a free loading car wrecker (and was possibly also Robin Masters).

The new Higgins is completely different. Rather than an oversharing self important blowhard with endless war stories from a colorful military career Higgins is a now simply a cheap, absent minded and mean-spirited brit who is noticeably lacking two tame dobermans. Rather than ‘the lads’ this new Higgins has a brainless female sidekick reminiscent of Kathy Bates with head trauma.

So poor female Higgins has pretty much nothing but un-funny bilious comments as a trade mark. Oh and maybe she’s Robin Masters too. That possibility seemed still alive. Her accent was at least believable, at least to my American ears.  I can’t blame the actress on this one.

In fact I found myself somewhat drawn to the cast despite the terrible story. We still have Magnum couch-surfing through the estate of (absent) millionaire Robin Masters. And YES, we did get the helicopter we remember back and there’s still a decent dose of car-porn. Then there’s the things that changed.

It could’ve been worse. The changes didn’t really hurt that much. It’s more the terrible story I had to endure.  And the 4 machine duels in 20 minutes. I was thinking all the flashbacks to Magnum’s time as an active duty War-Time combat deployed SEAL was really him pining away for a safer, quieter time.

If given a better script this show would definitely be okay. The casual machine gun duels should be the first thing to go. It seems the shows very afraid to have anyone have any sort of meaningful conversation without being under fire.

The dialogue was bad, the bad guy tried but had nothing to work with and the Higgins-Magnum tension is at best in limbo til the secretive Higgins character reveals more.

It’s still save-able, but I can’t recommend it.  It needs an entire new room of writers.