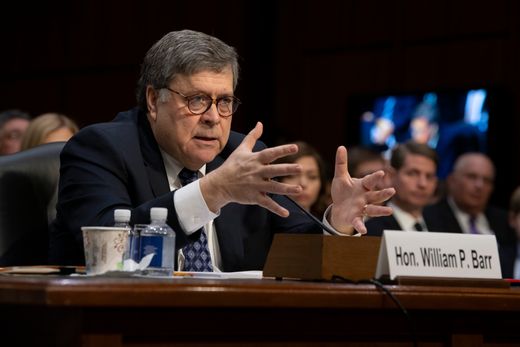 Today’s partisan hearing was a reflection of our bi-polar government. As senators coddled or cudgeled Barr based on party affiliation you gotta think the momentum is with the Democrats.

Sure, it’s the Senate where the GOP is in control, but this is certainly yet another cut in into the Orange flesh of the liar at 1600’s Administration.

When i tuned in it was Ernst, who gently asked about what the Russians may be up to, that friendly question from a Republican drew an evasive answer. It made him all the more unsympathetic when he was then rightly bashed by Blumenthal. Then he was coddled by Blackburn, bashed by Booker and so it went. Hirono was by far the heashest and rightly called Barr a liar.

When elaborating conspiracy theories and accepting praise from the right of course Barr looked like a victim. It was when the Democrats put the screws to him his spineless nature came right out.

Whenever questioned by a Democrat Barr’s voice was always a bit more affected if you ask me, with his regionalisms coming out. A “liars tell”?

On the topic of Foreign Adversaries who attacked our election Barr rarely seemed fully read in (this is the Attorney General mind you) and seemed to lack the competence to understand what happened or whats going on now.

Barr wasn’t good holding forth in the face of Corey Booker at all. The presidential hopeful questioned Barr’s honesty and barr had a hard time pitching any justifications. Bookers questions were damaging to the Attorney General, who SHOULD resign, but getting Barr to answer anything was always like nailing jello to a wall.

Tarheel GOP hater Tom Tillis shifted back into love-fest mode. The GOP senators had two points. It was a really gig investigation and the he, Barr, was totally justified to change (or at least obscure) its conclusions. Tillis offered a stiff defense of the way Barr has behaved as AG.  He went with a numbers approach to make it as boring and obscure s possible because Math, in and of itself, really has no relation to whether something is a crime or not.

The GOP refrain was this is just a sour grapes second stab at the reputation of poor president Trump, king of victimhood.

Senator Kamala Harris asked Barr if he’d had anyone asking him to launch punitive investigations. Barr just couldn’t answer. He was more disrespectful to Harris than others. I’m not sure if it because shes running for president, a woman of color or both.

Barr chaffed a bit when he delivered up stock denials on methodology questions about his offices approach. He wouldn’t say much about what they do and less about what people think they do.

Barr tried to punt to Mueller but Harris had none of it. The next move by Barr was to try to shift responsibility to Rosenstein.

Barr didn’t distinguish himself in his knowledge of his own departments methods at all.

Mike Crapo of Idaho from the GOP side was a little less affectionate to Barr, but by no means beat him up.

Barr never raised himself to a Star Trek or Bond Villain level like his boss often does.

Any sympathy bought by Barr was immediately destroyed by the chummy conversation with Senator from Hell Ted Cruz; where Barr suddenly had full commend of methods ad could relate them in detail. Maybe its just that he sounds smart compared to Cruz?

Looking me like some sort of Texas whorehouse owner than any kind of a politician from this century Cruz was that guy we’ve all grown to hate. He still managed to stump Barr by mistake once.

Their conversation was a paranoid and unamerican trip down Kremlin Misinformation lane. I walked away wondering who pulls Cruz’s strings

Ending Round 1 Pat Leahy, Democrat of Vermont went back to questions of more relevance. Like one focused on Barr’s motives in releasing his strange 4 page letter last month. He also expressed concern and asked Barr to commit not to interfere to not interfere in any ongoing investigations. Barr was evasive and took 3 lame swipes at an answer. Leahy wasn’t too thrilled with him. It’s also not clear if Barr actually agreed NOT to interfere based on his own bizarre view of his role and powers.

Barr was unsettled by some of this enough to start trying to dispel the idea that there were any “Underlying crimes”. He wasn’t making a lot of sense.

Then Dick Durbin of Illinois had some seriously unsettling questions about how Barr is mishandling the Trump Inaugural committee, which is mired in a multi million dollar scandal that’s looking criminal.

Sheldon Whitehouse of Rhode Island essentially laced right in. The Democrat was slightly pre-heated and was frustrated with the way Barr was evading. He was more able to box in and nail down Barr. His line of questioning was about foreign money and Grand Jury material being suppressed. Barr came off confused. A terrible look for the Attorney General of the United States.
Klobuchar grilled Barr on whether the Mueller Report reviewed Trumps taxes, Barr claimed ignorance.

Quoting pages and passages Klobuchar tried to get some accountability from Barr. You cant get blood from a stone  though, and he inartfully dodged any substantial answer.

In a final semi bombshell Klobuchar asked if the presidents conduct was consistent with his Oath of Office. Barr said it was his call that everything was cool.

Lightning Round continued with Blumenthal. He had specific questions in specific conversations that may haunt Barr later.

In general Barr spent a lot of time looking pretty damn bad. He was clueless on purpose to stonewall at times, but looking clueless just undermines the Justice Department he purports to run

Barrs most bizarre statement was putting words in Mueller’s mouth where he claimed Mueller was pretty much behind him and they barely disagree on anything. This seems ridiculous right off the bat. There’s a letter in the public record where Mueller outright questions the way Barr’s motives in mischarachterizing his report.

Lindsey Graham ended the session and promised to write a letter asking for any clarifications. GOP ass kissing was allowed in 5 second round of praise from some GOP member.

In a final petty gesture Barr described the angry letter from Mueller as ‘snitty’ and probably written by an underling. He held to the Republican line the presidents a victim in this. Forget about the idea that the president is a criminal, that’s his view of the system. That we have a designated criminal as a president,