President Trump is so bad and so hard to take that he’s a one man case that we should fire our entire government and return to British Empire. If given our own parliament and a several party system maybe this fascist craze will just blow over?

After an apparently sleepless trip across the pond where Air Force 1 sadly didn’t crash into the sea Trump blew out a bunch of insults and went to go visit the Brit Royals.

While the entire idea of having Royalty is completely stupid, the two princes seem to sort of be painfully aware of this. They do what they have to do with some humility. Quiet, gracious and compassionate, they couldn’t be more opposite Trump. Seeming to be always trying to earn the high degree of admiration they were born into, there’s no not liking them. And some of the Royals are really easy to not like. I was born into it from my Irish heritage. I had some relatives who HATED the Royal family. Those were different royals though and a much different time.

Prince Chuck, The Queen, crazy old Prince Philip? Take your pick. You could go to town on them, but then again they are all possessed of a great deal more dignity than Trump.

I guess I just think of my old Uncle Paddy who fought in Easter Rising bashing the Royals and it’s a little hard for me to admit they’re titular heads of a better government than ours. But it’s a mental hurdle I’ve now jumped.

Mostly because of the Princes. They’re simply nice guys. They were even nice to Trump.  The princes are polar opposites from the scamming lowlife Trump clan; whose patriarch bashed prince Ginger’s wife, Meaghan Markle for no real reason and then just lied about it.

Watching Trump around the Queen is way too close to watching ‘The Naked Gun; from the Files of Police Squad’! Always inappropriate, dressed like shit in an off the rack suit, the president looks bad all the time and is an un-funny Frank Drebin. 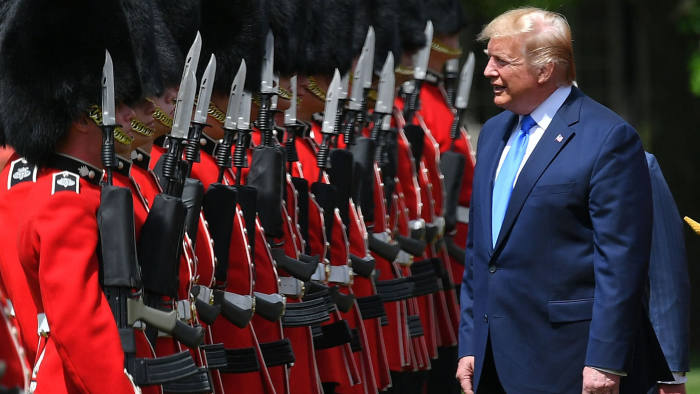 He’s been there 3 hours, lets see what happens when they stop praising him and he opens his blowhole.

Meanwhile, would you not trade congress for an immediate parliamentary election with direct representation on all levels? Then they can do things like just remove Kavanaugh from the Bench.

The people have proven they can be lied to and there’s been a few presidents, like Trump, Reagan and Nixon, who colluded with Enemy Powers to win their bids. Maybe the people here in America are just like the people of Westeros and deserve self determination? Make the president a figurehead and super-ambassador with no power and no pardon power, and no nuclear football! It’s not like Cocaine Mitch McConnell isn’t calling most of the plays anyway.

Why NOT a Prime Minister who could quickly be removed? The Trump nightmare would have been a six week footnote rather than a protracted time of intolerance and bad governance.  Plus we get all the screaming and yelling of a parliament, which also makes lots of sense for America. Imagine 4 parties. Maybe more, but there’s a mandate to cooperate. Like we wouldn’t benefit from more cooperation?

I could easily foresee the GOP and Democratic party enduring, and maybe a moderate party from the right and the left in the mix may better represent us. The more moderates would have a greater ability to influence more policy. Maybe the other two parties would be the Progressives and the Libertarians? It probably wouldn’t be worse.

Maybe, just maybe, George Washington was wrong. Or perhap just took it too far. The Chief Executive Office has by all definitions grown beyond its original mandate and is prone to tampering. There’s a whole bunch of arguments about why congress is a mess. Why not a bicameral parliament?

Then there the Electoral College Choke-Point leftover from making room in the Constitution for slavery. It didn’t come out of anything good and lead to the Civil War and so many bad chief executives its can only be called bad. It’s purpose is long past. When it’s been successfully tampered with we usually get a terrible president. It needs to go.

The wave of protests against trump will surely be BFD when we see them eclipse him accepting accolades in the coverage of this humiliating trip.