As protestors flood DC screaming and chanting against the confirmation of Brett Kavanaugh to the Supreme Court we’re at Rock Bottom as a Nation.

Our flag has never flown so low or under such troubled, Kremlin Red Skies.

The new GOP tactic of having its few women in power say the awful slut shaming things that the GOP men script for them (because are too smart to say them themselves) is likely dooming us all to decades of Kavanaughian misery.

Our national prospects have never been worse. We’ve now got a caveman on the Supreme Court. Kavanaugh’s approval ratings are roughly the same as the amount of Americans who Opposed Winning World War II,  about one-third of everyone. The other two-thirds passionately hate and fear Kavanaugh.

Screams and protests from the Senate Gallery, the sort unheard in decades of divisive legislating, is quite simply heartbreaking.

A grim, angry and entitled man on the SCOTUS bench is just another example of Donald Trump’s 2 Super Powers- To make people walk away more divided than they were before he spoke and, worse; an ability Constantly Reach New Lows through the utter lack of a moral basement.

Never forget Susan Collins, Senator from Maine, who lead the charge among women on the right to pretty much be Rape Cheerleaders for an angry drunken frat boy, so long as that frat boy is a conservative.

The Two Front War Against The Truth and of course Women and Minorities seems to be consequence free for now. It’s hard to say ‘Vote “em Out” when I’m pretty sure the GOP will try to fix the election with help from Putin again and this time the backlash will be greater and more immediate.

As his wife cavorts around Africa without him dressed in cast off movie villain outfits, the Social War at home remains a baffling example of failed indirect democracy. Since the 2nd election in less than 20 years to make the (huge) loser of the popular vote president the will of the American People is simply being ignored on many fronts.

Super Popular measures on Gun Control and the Affordable Care Acts are ignored or even attacked as a minority agenda slowly advances.

Then to top it all off we have a terrible possible predator  who seems likely open to blackmail going to a lifetime job telling the rest of us how to live.

Sure looks like this coming midterm is going to have Three main features.

First; the Democrats will likely win all over the map.

Second; there will be many states who fail to protect their Voting Process and a bunch of contested results where the GOP wins in a fishy way.

Third; BLOTUS Trump will absolutely claim every democratic win is a fraud and probably try to get the FBI to investigate the Democrats ONLY and find a way to NOT seat the new congress at all.

Trump WILL try to nullify the midterms.  Caveman Kavanaugh is about to beat the odds and become a Supreme Court Justice. The checks and balances meant to 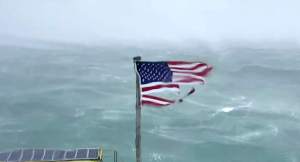 constrain incompetent or corrupt presidents will be severely inhibited and rigged to favor our criminal billionaire heir who hasnt made a dime on his own of a president.

It’s a sad day for decency.

This is what Putin wanted and its becoming sort of likely. Every time Trump stretches the rubber band of national morality to near snapping point the less and less it is able to return to its original shape. He’s deeply damaging all our institutions all the time.

The stakes of this election are really high. The people of any given region will not sit by and live their lives according to another regions morality. Any hint of Hacking in the election has the potential of having breaking into several regional republics.

The funny part about this, is, if it happens it would actually makes Trump the first president NOT born in the United States since the guys who were born when we were British Colonies. Talk about “what comes around goes around.” 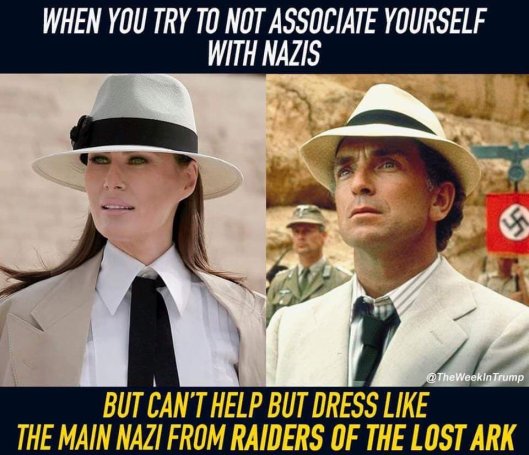 Bob Woodward really dropped a potentially administration ending book on us today in the form of his inside history of the Trump Administration so far, “Fear.”

Here’s what the book tells us- President Trump is a serial liar who may not even know what reality is. He dwells in a state of criminal semi-insanity akin to End-Times Nixon.

Dim and distant, Trump’s allowed to amuse himself (in his very few work hours) on a few fictional policies that everyone tells him are great. He also manages to advance a couple of actual narrow-minded assertions (calling them ‘ideas’ seems wrong) here and there just because his “Governing by whacked out Tweet at 4 AM” style is so overwhelming there’s no way to contain him.

How crazy is ‘the president’ right now? Well he’s already tried to order another world leader whacked (Assad of Syria). That’s right, the president ordered a Mob Style “Hit” on Assad in a wild call to Defense Secretary Mattis. After telling Trump he was all over it Mattis simply hung up and ignored him. Stunningly this pays off as Trump never follows up or seems to have recalled what he ordered. So its Ad-hoc governing at its very worst right now.

If  Woodward’s to be believed, and lets face it he SHOULD be, killing Assad and invading Syria would be the second time Trump’s ordered a country invaded and nothing has happened. (I’m assuming we’ve all heard of the half assed Dark Ages Warlord strategy that led to an ignored order to invade Venezuela).

Then there’s the knee -slapper about how back in January Trump’s lawyers pantomimed Trump’s clueless rage filled performance in a mock Robert Mueller interview for, of all people; the actual ROBERT MUELLER! This was their strategy? Sketch Improv couldn’t come up with anything more bizarre! Great crisis management there!

Other goodies in the book include just what “The Best People”; the Trump Cabinet; think of their boss. “Moron” was, unsurprisingly, in the mix. So was “Fucking Idiot” of course, and a bunch of references to pre-middle school behavior and intellect. And of course he regrets saying racism was evil in one of his many flubbed reactions to Charlottsville’s violent White Supremacist Riot last year.

It’s General Mattis who really skewers Trump, CBS puts it like this-

“Defense Secretary Jim Mattis reportedly told associates that Mr. Trump had the behavior and the understanding of “a fifth- or sixth-grader.” Current Chief of Staff John Kelly said in a meeting that Mr. Trump was an “idiot“.”

With a level of believability of Tillerson-ian proportions Kelly has denied he called the president an “Idiot”. Just another Trump Administration lie.

Kelly is a Quote Machine and should sing for a Punk Band! He also said; “He’s gone off the rails! We’re in Crazytown! I don’t even know why any of us are here! This is the worst job I’ve ever had!” (MY exclamation points, but like I’m wrong?)

Gary Cohn, a Cabinet level economic adviser (now gone on his own volition), saw a document on the president’s desk he simply judged too complex and inflammatory to allow Trump to see. He was probably right! Thinking on his feet he just grabbed it and tossed it “to protect the country” from the president’s reaction.

The book further tells us that one third of wife beater Rob Porter’s job was simply listening to a nonstop crazy rant all day. And then he had to try to de-fang the crazed unininformed ideas as “less then great.”

This is something we’ve also heard was a job Porter’s current punching bag Hope Hicks was stuck doing. The fact is listening to Trump on an angry destructive rant is also Ivanka and Kellyanne’s only real jobs. My guess is they just aren’t as good at getting yelled at and Trump’s an uncorked fire hydrant of Violent Stupidity they just can’t contain.

So now, according to what we glean from Woodward and (many) other sources, with the insulation stripped away by scandal and in Hicks case, apparently built up loathing, we’re all Trump’s Crazy Rant Beta Tester’s.

And the feelings are mutual. Trump openly disparages people in front of other staff. He apparently hates everyone around him and just verbally assaults people all day while tearing down their colleagues. Great for morale!

If the Trumpists are to be believed it’s all a pack of lies but Woodward sure captured Trump’s tone and spirit in the quotes and actions he details. I’m sure it’s mostly if not completely true.

An that’s maybe the craziest part of this book. No one credible doubts a word of it. Trumpist pawns point to the stock denials, but this books no hoax.

Its not even that different from what we heard in Fire and Fury months ago. In fact “What’s new?” might be the Trumpists best defense. They can point to years of reptilian behavior by their hero to back this one up.

The idea that Trump is a completely incompetent, erratic, rage-a-holic with no respect for his staff is not at all hard to believe. It would be the idea he ever showed courtesy or restraint that would actually be news at this point.

The President is way past 25th Amendment Territory if the book is even partly true. People grabbing things off the presidents desk because it would set him off? So that, by extension means if you want to light his fuse you can just put something on his desk to piss him off. There’s a term for this; it’s “Easily led.” or “Easily Manipulated”. That’s highly disturbing even if the presidents first instincts weren’t violent and criminal, which of course they are.

If you saw today’s Brett Kavanaugh SCOTUS Approval hearings you know this congress wont do anything about it. Kavanaugh just scowled most of the day as the Republicans upbraided Democrats for asking that one million pages of documents from just Kavanaugh’s time as W Bush White House Counsel alone be released to be  reviewed and considered. No Such Luck. Look for Kavanaugh to be shoehorned in with Pence casting the 51st vote.  That’s how the most Corrupt Least Transparent White House in History does things. Like a bunch of highly incompetent, extremely angry criminals.

One thing Trump said is true- the world is laughing at us, especially our so called  leaders.