Its been a rough 10 years for Star Trek. So much was lost in the horrible JJ Abrams experiment. Finally a product worth watching is out there. With an interesting first 2 episodes and seeming to be trending up ‘Star Trek – Picard’ is worth a few weeks of CBS Unlimited. As of episode 2 its shown some real Star Trek possibilities while also being one of the smoother pilots in franchise history. 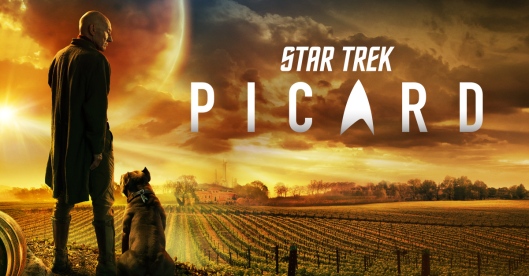 The Picard Show DOES have one aspect seen in the Hated Kelvin Timeline. There was a Romulan Supernova in this timeline as well. It’s canon, it happened. The scale has been reduced as the Red Matter simply was more effective on this side of the timeline.  However it was a big enough deal to take out the Romulan Solar system and wrecks their Empire.

The Romulans had always seemed the more devious adversary, and you’d think theyd be so invested in other systems that they could lose even their best system and still be okay.

That said, the repercussions seem to be confined to that. The Romulan’s lost their solar system and apparently their Empire collapsed too.  Supposing the supernova was enough to at least wreck the economies of the surrounding area maybe the Romulans do get sort of cored out.

In episode 1 we find out most Romulans became refugees in a noble but highly unpopular rescue operation championed and coordinated by Picard. The Romulan Diaspora seems to have taken away none of their duplicity though.

Romulans being Romulans the rescue only went just so well. It tore at the fabric of Star Fleet and almost tore the Federation apart. And of course the Romulan’s were only just so grateful. Some love Picard, and some are ready to kill him. So the Romulan’s mostly still act like Romulan’s. They also seem to have some kind of coordination or agency working on their behalf and have possibly infiltrated Star Fleet Intel. We’re awaiting some key information there, but it sure looks that way

In other depressing future news, it seems androids of all types are now banned and Picard is the one champion of the noble, but highly unpopular idea that the lives of certain androids are in fact equal to those of humans. This view was never really popular in the Federation, and after the Borg pull off a decent attempt to Assimilate all humanity in Star Trek Fist Contact, the disdain for androids is well set up.

Now former Admiral Picard has left Star Fleet. He disagreed with its increasing militarism in the wake of a Pearl Harbor-like attack by ‘synthetics’ that destroys Utopia Planetia Shipyards and killed a lot of people. Seems the nihilistic Romulans have had a hand in it. We find out later from Admiral Clancy that this has left Star Fleet short of ships and resources. Mars is a mess. The problem still hasn’t been cleared up. One thing I did verify was that the entire fleet of rescue ships they used to help out the Romulans was there when the attack was carried out by apparently hacked and totally suicidal synthetics.

Episode One shows us some very enjoyable sequences of Picard’s beautiful french manor house where he’s kind of gone hermit to a degree, but has several causes he is championing as a private citizen.

We find out there is mass media and that people are pretty interested in what a former Galaxy Class Starship captain’s views would be.

In a nod to today’s atmosphere Picard is set up and slammed by a sort of intolerant Media operation in an interview gone wrong. Whether the interview was always an ambush or Picard really is just a bit too naive is left up to you. The truth seems somewhere in the middle.

The Hack Attack on Utopia Planetia and a nebulous media reflect right back on modern society like good Star Trek Should. So it’s doing Star Trek things right away by shining a light on what’s going on in the real world at the time its created, in this case that the media can be biased and the various Federation races can still be petty and factional.

The crux of the story revolves around some very Philip K Dick-like Replicant-type androids and what exactly is being done with a half destroyed BORG Cube that’s still lingering , wherever it is. Whats left of the Romulans have some access to it as well as regular Federation scientists.

Picard, a known humanitarian and something of a black sheep celebrity, naturally draws the competing forces to himself in a convincing and believable way. It’s not forced.Nothings been jammed in. The story lines unify nicely. These are the sort of things Jean-Luc Picard was always about

None of the stink of the JJ Abrams era really affects this show.

We have some big time baddies in the form of the jerk Romulans and their constant aggressive militarism and the man who still wants to save them anyway. It took a couple of views to figure it out, but the Romulan assassins all seem to have cool new and very Romulan weapon, a mean spirited and super evil “Take Them with You” suicide pill (implanted in their teeth?) that allow them to spit acid as they die.  Such a Romulan thing to do They’re still mostly a bunch of heels!

The cast is up to it. With Patrick Stewart firmly in the center the show has no problems. Unlike terrible Star Trek Discovery this show has familiar warmth and people show concern for each other.

In Episode 2 Admiral Picard gets a dose of reality along with the audience. Star Fleet C in C Admiral Clancy is well played by Ann Magnuson. While seemingly hostile to Picard, this character seems likely to warm up to the old Admiral. Right now though, Picard is officially NOT a Star Fleet officer of any kind. In fact, maybe he should stay 1500 feet away from any Starfleet installations for awhile!

It’s now that Clancy also reveals the media wasn’t kidding in his poorly received interview.  Things on Mars are still just horrible, as a result they’re hard up for ships and they can’t really do diplomacy in the wake of the Romulan Supernova. So while the media was confrontational to Picard he had some guilt, delusions or coping mechanisms of his own about the Mars attack.

This is a huge moment. So many revelations are dropped. Star Fleet’s hard up? The Federation isn’t engaging diplomatically? It’s on point for BREXIT and the American withdrawal from the world stage without hammering it home awkwardly. Again, it’s good Star Trek.

Then Picard gets a really bad but mostly unexplained medical diagnosis from someone who isn’t Dr Crusher.  He only has just so much time left as we find out in effective and appropriately Star Trek-like style. He views his newly limited mortality as just one more fact, albeit an unpleasant one.

He’s pretty clear how he dies is nowhere near as important as finishing his life’s work before whatever it is catches up to him. It would seem to line up with what we saw of an elderly Picard in the final episode of Star Trek The Next Generation. So at least some continuity is being preserved so far. It should be kept in mind though the elderly Picard in “All Good Things” was in a hypothetical future generated by The Q entity, whose probably just too powerful and campy to show up in this, the most serious Star Trek show yet.

Just so we know for sure that Picard may not want to live on a whole lot longer, his doctor warns him against going back into Space, but then admits getting killed may be better than the disease. So whatever it is 24th Century doctors are afraid of it.

Two hours in the plot is increasingly complex but unfolding nicely and makes sense. We can see why Picard has all of these intense traits and how he would be so interested in the things that are driving him. Unlike EVERY other Star Trek show this project assumes the fans are fairly smart and doesnt try to re-invent Star Trek on the assumption its somehow bad in the first place. Roddenberry’s vision is more or less intact. This is the Star Trek you remember.

Maybe the best part is the show slows down and develops things rather than showering us with the substance and plot-free Abrams material. It’s a much batter show than Discovery (which I may now bring myself to watch).

Again, all signs in the first two episodes are GOOD. Patrick Stewart reprises the role perfectly. He’s the guy we loved. The story is not episodic but still so far seems to be really good. The new themes are longer looks at things we’ve touched on before. The very Philip K Dick theme of Androids who are very much biological with android minds, whether or not they have a humanity of their own. We have some great episodes regarding AI and androids. This deeper dive on the topic is very much in tradition of The Next Generation. The Borg are still a Roddenberry creation and effectively menacing. Nothing good is gonna happen on that Cube, even if it has been 16 years since it last posed an issue per the sign inside regarding assimilation’s.

So with the make or break third date/ episode about to drop it seems that NOW is the time to pick up CBS Unlimited. If you wait until after Thursday you can see all the way up Episode 4 on your free trial.

Do yourself a favor and go with the “With Commercials” option. Its the way youre used to seeing this kind of TV anyway.

This show is good and it’s definitely time to try it out for a few episodes. Its seems to be trending up.  As good as the Mandalorian. I truly approve.