Russian Spy and NRA Activist Maria Butina is definitely lying about not being a Kremlin Asset. The Government’s story isn’t seamless yet, but give them time. Her ‘boyfriend’ is now under Indictment for fraud and surely aware, as we are, that shes been trying to cooperate against him from day one. It just keeps getting weirder.

1– She’s Got Too Much Money

She had access to too much money to be just some Russian with a student visa. Why’s she running around with around 300 grand? Where’d the money she used to influence the NRA come from?

That 56 year old ‘boyfriend’ is plain old unbelievable. Fraudster Paul Allen Erickson owns only a 23-year-old non classic car. As far as political tricksters go he was even less successful than Roger Stone. He’s broke and always has been. He lied, cheated and stole for money and seems to have never worked. She started dating this con man troll when she was like 23?  About the age of his car now? Sure. Why’d he give her 20 Grand? As I just noted, pimpin’ wasn’t easy for Erickson in the first place! I think that the Operation was always looking to self finance to advance its goals. Im sure she charged up her credit cards through the roof with fraudulent intent too. It’d be the least of her problems too, actually.

3- We’ve Heard this Before (From Putin)

Her story is Putin’s story.  Both have said that if she were a spy she’s ‘the worst spy ever.’ Okay. Granted. I believe you’re the worst spy ever. And you know what, that’s not a denial, either. It’s actually in the running for the name of this article. How is getting caught proof you’re innocent?

The Government didn’t have every single duck in a row and may have been wrong believing Butina was trading in sex, but in light of her relationship with Erickson? He’s in no way appealing to someone in their mid 20s. He looks terrible even among people his own age. He’s a con man and looks like one.

Butina works for or was spun off by the Kremlin. Shes got some kind of loyalty and connection to Putin. It makes more sense than ‘she’s the greatest sweet talker of all time and was a wheel in the NRA by 27.’

It would be nice if anyone on CNN had noted she was saying the same thing Putin says. They have reported Putin’s comments on this. I guess eventually they’ll put 2 and 2 together and say it, but you heard it here first.

UPDATED – Thought by her Kremlin masters to be just unattractive enough to not be seen as a honeypot we have 29 year old soviet style FSB semi-sleeper Russian Agent Maria Butina. She’s been at the peripheral of the right wings worst ideas, notably the NRA and it’s constant push for expanded gun rights and a no Background checks. 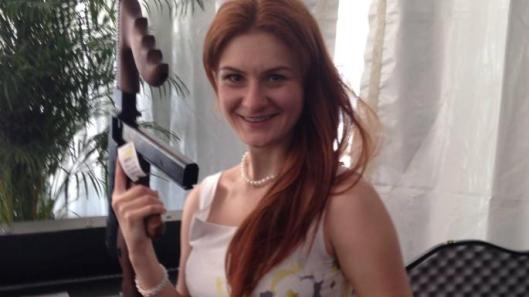 Posing in some accounts as a grad student writing a thesis in whatever she was sort of a eyepiece for the Kremlin as it looked for Americans who were inclined towards or already on a treasonous path. So of COURSE groups like Evangelicals, CPAC and the NRA caught her attention and were passed up the FSB food chain where Putin and his guys can work them over into useful Quislings or worse.

How powerful a spy is she? Well we cant be sure but she had a powerful Spymaster controlling her, one Alexander Torshin. Consider him an FSB Oligarch in the service of Putin. Torshin garnered hapless congressman Dana Rohrbacher as a pal and even punked John Bolton into going to Russia to encourage a (fictional) gun rights movement for a fistful of dubious cash Bolton all too naively took. (The idea Russia would let its citizens own guns is outright ridiculous as its a complete autocracy that has long been killing journalists. Like they would want those journalists to be able to shoot back? Come now!)

The “Foreign Policy Expert” comes off like a complete idiot in the video, and the fake russian group left up until late summer 2018, so you can see it HERE – its a real LOL actually

So no two ways about it, Butina is a big deal. She could pick winners and losers via dirty tricks, she could funnel money and information. Was she was a full blown spy? It seems that way.

It was most likely either her or Torshin who bagged over or arranged some kind of crypto-currency exchange of 30 MILLION DOLLARS to the NRA, much earmarked for Pro-Trump (and virulently Anti-Hillary) ads. She was somewhat ubiquitous in attending Right Wing Functions like Gun Shows and CPAC. An image search brings back dozens of pictures of her gun totting and bible thumping with the dumbest of them.

UPDATE- Butina seems to have legitimately had a 5 grand a month contract with the Outdoor Channel. Why? It’s pretty hard to say but it was reported as verified on the July 25 Rachel Maddow Show. I’m pretty sure the NRA figures in to this too. So the Spy is doing better than her fake boyfriend.

She got caught up in some ‘gun totter on the streets’ interviews the NRA put together for the internet. More bizarrely, she was suddenly a press corps member whose strange question about US – Russian Sanctions to Trump at an NRA Friendly right wing forum on July 11, 2015 scared the shit out of Steve Bannon (per Fire & Fury and other sources). Butina came off like a spy to Bannon, proving that even bigots can have moments of clarity.

With then NRA president Wayne LaPierre

If your goal is dividing America and taking it apart the NRA is a great place to start.  YOu don’t need to be genius to figure this one out.  Former NRA President Wayne Lapierre was an endless fountain of UnAmerican comments.

Disdain for law enforcement, constant sympathy for armed Open Carry lunatics and introducing Conspiracy Theories at the moment any Gun Massacre occurs are the methods of the NRA. They are right out of the old Soviet Playbook that Russian Intelligence works off of. Its EASY to make a case the NRA is a Russian Front Organization. 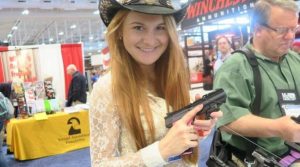 Not Hiding in plain sight

The NRA is such a treasonous, unAmerican Organization that you don’t need to be all that smart to see it ripe for sowing sedition in it’s rhetoric. As far back as the early 90’s the NRA had called US Federal Agents acting on a duly sworn warrant  “Jackbooted Thugs”, a statement that so pissed off former president George HW Bush he uttered a few profanities while quitting and then condemning the organization.

While I’m no fan, Bannon allegedly was smart enough and savvy enough to immediately be struck by Butina’s question and stunned enough to think it over and judge it more than a bit strange. Bannon, for all his bile, racism and bad ideas policy-wise, was perhaps the most 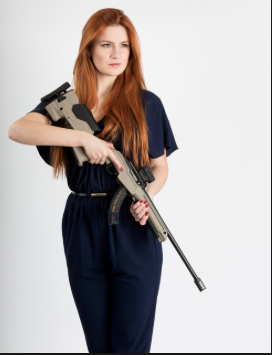 intelligent Trumpist and he was totally right on this one.

Butina was a plant and the question was written by the Kremlin. Why Trump, who hates the media, indulged her for a question also seemed weird to Bannon (and he was right to think that). So we’re not talking subtlety here. Borderline Brazen is a better term.

Butina had claimed some strange privileges in the past. Like saying she had a Diplomatic Passport and could spirit people in and out of Russia in a boasting session to an FBI Agent. So like I said, this wasn’t all that subtle. So maybe the full blown spy wasn’t given the best training? Nevertheless she was effective.

UPDATE- in the July 18 installment of CNN with Don Lemon, Juliette Kayem said theres some indications the NRA actually sponsored Butina’s student visa, meaning she’s a planned plant and the NRA is an ongoing treasonous enterprise.

Now sitting in jail and unlikely to get out barring some kind of spy exchange, Big Butina is probably going to clam up and wait for her government to go ahead and catch someone worthy of exchanging for her (unlikely).

She has no chance of getting bail. She will rot in jail until some kind of trial, which will probably be the End of the NRA and maybe her sugar daddy congressman buddy, Dana Rohrbacher, a guy fellow GOP Rep Kevin McCarthy has described as “taking money right from Putin”

UPDATE- .  In an unheard of move Mara Butina is ‘cooperating’ with US Government Investigators. Its crazy,, but then again, so’s everything else about her story. Keep your “Punked Filter” on as always when dealing with the Kremlin and its minions. She  may be trying to pull something on her own behalf or be continuing her mission from jail It’s hard to say.

Butina’s charges aren’t sealed. This makes her somewhat unique among Mueller Probe Catches. She will be a valuable window for the general public to see some of the machinations of the Mueller Probe, which to this point looks effective and inexorable.

Butina was certainly sizing up options for the Kremlin. The indictment against her includes statements to known FSB sources as damning as “I await further orders.” She wasn’t selling stuff on consignment to Pottery Barn, so you don’t have to be  genius to know what that meant.

Final thought – Maybe Jessica Chastain for the movie? Jessica’s much prettier, but on the other hand, she’s familiar with spy roles.