In a long and rambling speech focused mostly on World War 2 Trump spent more time calling American Woman murderers than he did condemning Hitler.  Then something sort of bizarre happened.  Trump spoke of his need for a Wall  and said “Walls always Work, they just work, they work, okay? Walls Work” and left that out there as some kind of immutable truth. This doesn’t really sit well in a speech centered around the D-Day Invasion, which by all accounts was a bad day for Walls.

Just to get it out of the way – the State of the Union was mostly a badly read history lesson on how World War 2 went down in Trumpian terms. In 2019.

He was careful not to bash Hitler in his extended comments about the conflict. I guess he figures that there were very fine people on both sides of the war. He mostly saved his condemnations for American Women.  Immigrants fared no better in his grim speech. Seems Hitler was off-limits though, even talking about the Normandy Invasion.

He rambled on a lot about the need for his racist Southern Border Wall. Xenophobia was front and center. A lot of pure fear. The constant refrain was about the impenetrability of his proposed Wall. Its supposedly goiing to end the opiate scourge. A lot of lies about the pills made on Ohio coming over the border from Mexico just dont add up.

Then in the next snorting breath he was on to D-Day, where we attacked and destroyed Hitler’s Atlantic Wall,  essentially undercutting his own point. And then really dwelling on it. 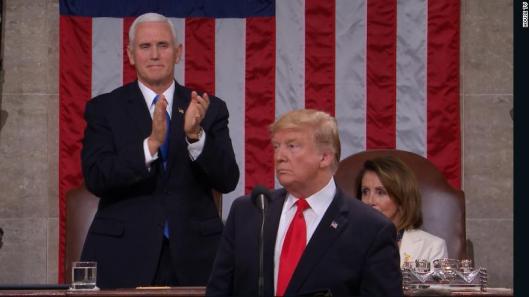 Contradictory Statements on whether “Walls Work”

While he managed to talk about D-Day at length on several occasions Trump was demonstratively ignorant of the fact that the Normandy Invasion was a pretty bad day for the idea that Walls, in this case backed up with mines, artillery, machine guns, aircraft and thousands of defenders, actually work at all.

If you’ve seen the first 20 minutes of Saving Private Ryan you see the ineffectiveness of a wall.  They don’t keep out the Wall-Hating Americans who blow the damn thing apart. In that case the wall was 5 years in the making and lasted for about 5-12  hours.  And again, that’s WITH wanton use of deadly force.

Another ironic moment may be when Trump acknowledged Buzz Aldrin, a man whose journeyed through the “Impenetrable Van Allen Belts” to the moon. I’m not sure why the only conspiracy BLOTUS doesn’t believe is the moon landing, but apparently as far the Moon and World War 2 he was mostly factual, if grandiose (as always).

I wish someone with a bigger platform than me can mention the asinine nature of segueing from “Walls Work” to D-Day in same bad speech. I will not sue you, I’ll just throw shade. This ironic point shouldn’t be totally lost.

While he made a lot of assertions, and even found time to speculate on violent crime without ever crediting the Police for their good work in the murder he cited, a gang beef on a 7 Train Platform solved in less than 24 hours with the prime suspect in custody by his hometown Police Department, our own NYPD. Not one word of hope beyond his wall. Lots of fear about MS-13, not an ounce of context or praise for the great police job the NYPD and its amazin g Detectoves pulled off. Vulgarian Trump can’t speak of the police without urging them to be brutal or oppressive so they get left out of the speech and just don’t get any credit. MS-13 got repeated mentions and may have been levated to the biggest public threat ever with wild rhetoric. I live 4 stops from the murder, I’m not scared any more than I was before it. Mostly because of the great professional police force we have in this town. I think its a great cae for state taxes, theyre so much more qualified than the Orlando Deputies I simply feared rather than respected.

When talking about terrorists we’ve droned Trump said on a couple of occassions “We’ve KILLED them! We KILLED THEM!” I think we all prefered what every other president in history has said about terroists who getthemselves killed “We’ve bought them to Justice”

The meandering screed of misleading lies about the some recent reproductive laws didn’t go well with the half-hearted circus ringleader to the record number of women elected. Of the 190 women elected only 13 are Republicans though, and slamming all women with falsehoods on their right to choose just hung in the  air like a drunkards fart in a still pub.

In many parts he free-styled and lost the thread. When back on the teleprompter he suffered from what sounded like his dentures slipping and some really emotionless outright reading when his mouth got ahead of his brain.

Pelosi will probably win the day tomorrow as Trump will surely meltdown and start hatefully tweeting in minutes or hours and lose any “Win” he got out of what I’m gonna call a generationally bad and poorly delivered SOTU.

The Maroon 5 Superbowl Halftime show at least had some brevity, I clocked Trump at a near even 90 minutes.