While the original post on the evils of Sarah Huckabee Sanders is comprehensive; the way the national discourse has fallen off the table recently with a spate of violent attacks coming from the political right. The recent horrific Pittsburgh Synagogue Massacre was front and center for a singularly bad day for America’s tas peyer paid  designated liar, Sarah Huckabee Sanders.

SHS sat most of the month out, but the October 29th presser was the first in 26 days as the Trump Administration continues to do business in closed rooms with locked doors in the dead of night.

Mostly we see her now when things are incredibly bad and White House comments are long overdue. For some reason this has no impact on the angry indignance with which Sarah goes about her infrequent pressers.

Shame is never gonna set in to these horrible pressers or the woman who runs them with Goebbels-like dissonance. We can stop expecting the administration to start to learn or to start leading. This is it folks. We have the most corrupt and incompetent Administration this side of Ancient Rome. 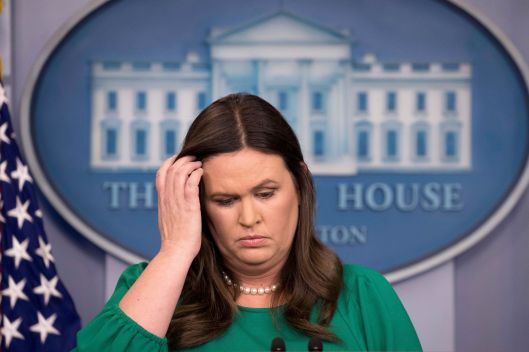 As always the presser started 25 minutes late, much like Mein Kampf recommends.

Looming over the October 29th presser was a spate of recent hate crimes most people who don’t watch Fox News more or less blame the president for inspiring.

The atmosphere was first charged by the 14 (and counting) devices mailed out by a Florida Trumpist nicknamed the #MAGABomber by Twitter based on his targets. Driving around in his home/ bomb factory / vanifesto he had managed to empty out the CNN building and credibly attempt to kill former presidents Clinton and Obama among many others. 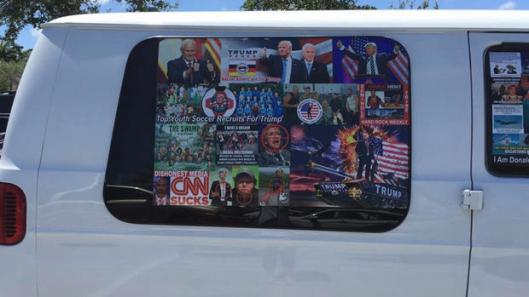 Next an old school Nazi Anti Semite shot up a Pittsburgh synagogue and killed eleven innocent worshippers and wounded many others. The shooter made some social media posts that showed he was moved to action in part by the presidents xenophobic obsession and repeated rants regarding a group of immigrants apparently following the harvest north Trump’s classified as a Democratic Party Funded Immigrant Caravan designed to swing the midterm election. They’re currently about a thousand miles from the US Southern border. More on the so called caravan later.

In a macabre twist, a 96-year-old Holocaust survivor was among those killed. Thats where the United States is at just about 500 days into President Trump’s inept and criminal administration.

It was another new low for angry Sarah Huckabee Sanders.

On to today’s Ministry of Information Dance of Dishonesty!

Sarah outright lied and claimed the president had won the popular vote with 63 million votes when he in fact lost by over 3 million votes. Shades of Spicer in the shrubs on that one!

It didn’t get much better. One positive, she managed to stop herself in the middle of starting to pick her nose. After that you could tell something was stuck in her simuses and adding to her overt irritation. 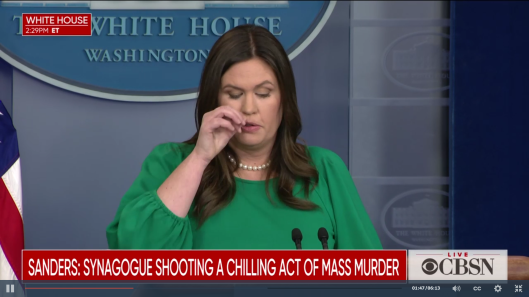 Trump had thrown out some horrible tweets about people who were MAGABomber targets to start the day and made then some off the cuff, stupid, uninformed statements and hard to swallow denials getting into his helicopter. So the clouds were well seeded.

Hemmed in by insensitive statements by her boss that sort of blamed the victims at the synagogue; Sarah didn’t bother to do much more than deny reality and say false things when confronted. No one was buying.

The idea the president felt the Synagogue lacked a Good Guy With A Gun and was asking for it hung in the air after Trump made off-hand observations that were first darkly un-American and second sort of dissed the victims with the implication they were reckless not having an armed guard and therefore sort of played a hand in their own deaths.

The shooter for the record, was super well armed. More well armed than my character in ‘Tom Clancy’s Ghost Recon: Ghostlands‘ avatar.  He had 2 pistols and an AK-47. He wounded 3 cops in a gunfight while massacring 11 American citizens and then held SWAT at bay for some time.  So the idea an armed guard or anything short of a machine gun nest could have stopped the guy is laughable and plain old sick.

In her chrome-a-key green sure to be parodied dress Sarah sounded like the ambassador from a hostile and rude Star Trek race. The only solution for Gun Violence was hardening schools and places of worship. It’s just asking for it in Trump’s world if you do anything without armed security (or go around not packing heat).

On the #MAGABomber topic she just lied and pretended the idea that he supported Trump was a media fantasy despite the social media posts and threats going back months the MAGABomber had verifiably made.

Humility was in short supply when asked if she is simply lying or out of the loop and a back and forth with CNN’s pundits was answered with rudeness and dismissive comments as always.

The president has been lying and spreading fear with repeated assertions the migrants from Central America were ISIS concealing terrorists in the ranks. This is what motivated the Synagogue shooter, who kind of liked Trump, he just thought he was too muted in his anti-semitism.

This invited questions about Trump suspending or plain violating the Posse Comitatus Act, which pretty much forbids the president from using Federal Troops to enforce Domestic Policies within the United States. Sanders was simply evasive and made some false claims about the act not applying. To be clear to suspend Posse Comitatus the “caravan” as the right has dubbed it, has to be classified an Invading Force.

Maybe enough racist governors let him deploy their National Guard Units, but it’s really unclear what Trump would want the military to even do, open fire? As far as deploying the Army? Seems to be specifically prohibited. It would probably be met with great resistance by any officer forced to command such an expedition.

It’s an issue that should go away as soon as the midterms end. Trump really likes talking about this and the Fox News Feedback Loop makes sure he keeps seeing it though, so who knows?

And at the 23 minute mark Sarah declared she was out of time and stormed off. 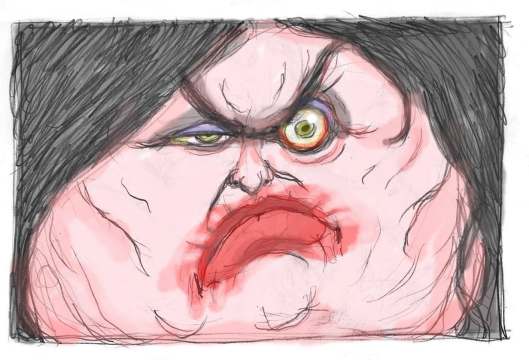