Today we were treated to a largely unnecessary and completely chaotic appearance by President Trump in the Oval Office as the afternoon wore on. All of the traits that have driven this president’s personal approval ratings to a dismal place in the low 30’s simply ran rampant. The president was just lost to his worst impulses most of the time.

Bewildered Out of the Gate

Stubborn, dim, defiant, ignorant, inarticulate, dishonest, unrealistic, outright wrong and of course, inappropriate pretty much describe where Trump was at mentally for this whole sad display of non-leadership in the face of an unfolding Natural Disaster.

The first part of the ‘address’ was an off the cuff and unscripted science lesson where the president sent up a couple of his ‘Best People’ to explain what he simply couldn’t about dangerous Hurricane Maria, a sustained Category 4 storm heading toward the Carolina’s.

While the ‘experts’ were okay, when the president spoke it was as garbled and imprecise as ever. Using his ever shrinking vocabulary seems more and  more difficult for Trump.

There was also, maybe, some aspects of a Cognitive Disorder presenting themselves too. More on that later.

As the image shows, the president looked dazed and confused as the dumbed down science was spoon-fed him. It seemed to frustrate Trump, something he simply doesn’t bear well. Before things were over a fuming and defiant Trump showed, as far as the truth goes, he’s having none of it.

On the initial topic of Hurricane Florence he sounded like he was simply lost looking for a synonym for “Wet”. Really, it was the kind of “Low Energy” verbal sputtering he would deride had anyone else blurted it out. The president seemed lost as to what his point was a couple of times.

Of Florence he would have us know this profound piece of sage wisdom;

“Its very, very wet. Tremendously wet. Wetter than anything we’ve seen, maybe ever.” He had no other term for what most people just call ‘rainfall” or even simply “rain”. Trump only knows the word ‘wet’.

Does Trump Suffer from a Growing Cognitive Disorder?

More on point the president seems to have some aspects of a Cognitive Disorder. He was apparently getting angry and changing the subject to get away from something he couldn’t understand.

Perhaps that’s why the president was focused on the wrong Hurricane and simply started blowing off steam with some angry lying? Blowing up when you don’t understand something would definitely be something that a Cognitive Disorder would cause.

To be clear, a cognitive disorder wouldn’t make him subject to classic dementia. So he wouldn’t say, think he could fly. Instead he would be hard pressed to explain things at times. A person with a Cognitive Disorder would not be able to stay on topic much. They would also struggle for seemingly easy words and their vocabulary would shrink.

Trump’s erratic penchant for just freelancing and going on Off-Topic Rants is showing up more and more lately. If he does have a Cognitive issue being in the job he is will only make it worse fast.

Another disturbing sign would be that he simply has not grown or learned a thing in his 19 months in office. This also could be attributed to a cognitive issue or general cognitive decline.

One things for sure; as Hillary said of Trump; “This is it, folks. There is no second act.”

Grandiose Lies and an Angry shift to Puerto Rico

To finish off the press conference Trump went with cobbling together three of his very favorite rhetorical tactics in a row- 1- veering wildly off-track; 2- to tell needless lies; 3- peppered with defiant, dishonest boasting.

For the record the provocation for Trump’s trip into Fantasyland was a question about whether he had learned anything from the response to Maria that he would use in this crisis. It was a question he should have passed on. He lacks the character to answer something so introspective. As usual when made uncomfortable the president went with anger and lies. The wheels just came right off at that point.

The president cluelessly ruminated on Hurricane Maria, which is fast becoming accepted as one of the worst disasters of the century.

There was no real need to talk about the Hurricane Maria disaster at all from the administration perspective. Right off the top-there were pressing matters at hand right now! Still, the impulsive president couldn’t resist the opportunity to simply start lying. Could it be he was uncomfortable from all his experts smart talk going over his head? Was he simply showing he was out of his depth? More signs of Cognitive difficulty.

It comports well with accounts of erratic self interrupting non-reality hindered rants we get from the Anonymous New York Times Op Ed, Bob Woodward’s book “Fear”, dropping today and the now venerable tome ‘Fire and Fury”.  Except it was on Live television in real time. Ugly isn’t a strong enough word. It’s a bad way to run things that no competent or sane person would knowingly contrive to start off with. Throw in “Melt-done Prone Anger Driven President” and it’s just a recipe for disaster.

It’s Not JUST The Dunning-Kruger Effect

If someone is suffering from a cognitive disorder things would look much like they did today. The Dunning-Kruger Effect could seem to be the what’s really driving it and it wouldn’t be totally untrue. From the outside it would be hard to tell for a while. Inside the afflicted mind, the person would first lose the ability to really understand that they had become incompetent, so the Dunning-Kruger comparisons would likely be rife. Like they have for the last 2 years regarding Trump and his team. They verifiably lack the competent to recognize that they are incompetent. Pick your disaster.  The Maria Fiasco, Border Family Seperation Policies, several rejected travel ban attempts. The legislative record of the Trump administration, as he would say; is a complete and total disaster.

The statements Trump made were not tethered to any realistic account of the Hurricane Maria Catastrophe. He seemed to believe himself too, which is also frightening.

At the start of his rant, shockingly, he gave himself and his administration high marks. The he went to bullshitting about Puerto Rico being some kind of primitive backwater that was a mess before the hurricane.  Suffice it to say he grossly misrepresented the situation, which while not great, was not the worst (or all that far away) before the storm.

“One of the best jobs we’ve done,” he shamelessly lied…or worse even believes.  The 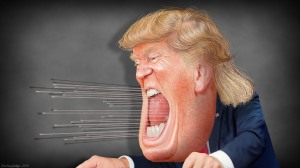 change of topic seemed completely spur of the moment. After all, if you’re Trump Hurricane Maria was a subject best ignored. Suddenly it’s front and center right there on live TV! Trump essentially regaled in his own ignorance and displayed no regard for American citizens currently in jeopardy.

Today was frightening as he co-opted his own press conference to lie about something else. It’s looking like Trump has a very limited view of reality.

He should have simply left it to his experts and not taken part in the whole affair. It would have been blessedly NORMAL in fact. Once he got going the president couldn’t stop.  The lies came quick and easy but were poorly crafted to say the least! The president is nothing if not consistently, inveteratly, dishonest.

“An Incredible Unsung Success,” was how he falsely summed up his administrations totally bungled response to Maria, diving deeper into hos own personal madness.

It took a few minutes to get to the end of his long, insincere boasting session of pure falsehoods.  Seems the president has just been living in his own little world of narrow-minded ignorant fantasy about Puerto Rico and Hurricane Maria this whole time. Upsetting to say the least!

As Americans suffer the president is in some of kind of obvious mental decline. To those who say ‘You’re not a doctor,” I say,”Okay, but you don’t need to be a rocket scientist to point at the moon anymore than you need a Psych degree to say Trump’s off his rocker.”

This has to chill people living in the Carolina’s! He thinks losing 3000 people to the last hurricane was a success? Whats the definition of success for this storm? In fact Trump is seeming more than a bit like the Emperor Nero these days.

It’s clear that once things get complicated and inevitably a few set backs show up the president will simply lie and deny the problem. The part where the Hurricane will mostly hit Trump-Lovin’ areas probably won’t outweight his personal vanity so far as being better at managing this disaster. There’s a very high chance things go very slowly and badly once again.

This ‘president’, as usual, didn’t concede an inch to reality. He blatantly lied and misrepresented the situation in a petty, improvised manner. The fact that Hurricane Maria was as bad, as fatal and as important as 9-11 will eventually sink in and he’ll be on the wrong side of History once again, but til then we’re stuck with this.  The fact the president under performed and was ignorant and probably more than a tad racist all coalesced into a completely bungled disaster response that killed far more than the storm itself. It would be fair to call it MACABRE, actually.

It would seem the president is only going to get worse. Hang on!