Updated – I’m still pretty shocked I was wrong about this. A delay of even one more day probably would have killed all chance. It’s still hard to believe they didnt just find someone else. Here is the original post, which can still get shoved back into being more correct than it is right now

As I predicted the Kavanaugh Hearing was a complete disaster for Republicans. For starters, they pulled the plug on the much vaunted “Having a woman ask terrible questions for them” tactic when the relative reasonableness of the questioning worked fine for accuser, Dr Ford, and was never going to clear Kavanaugh. 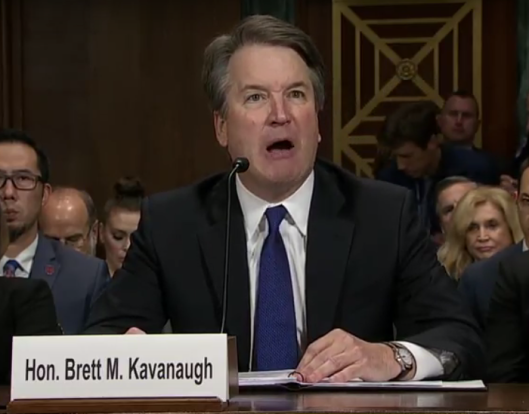 So that was a 2-fer on predictions. It was a disaster and they couldn’t stick to their plan. Fair enough, no plan survives contact with the Enemy. The real measure of any strategic situation is how you handle a setback. The GOP just couldn’t.

Between a laugher of an insincere speech from Lindsey Graham, who seized control of the hearing (in a way that may not have been in order) by shouting like a man in the depths of an Ether Binge. It was a Trump-loving Social Suicide of sorts. He had good reason to panic. The Caveman was unfreezing right in front of the nation and the world on TV. He was becoming self aware and paranoid (revenge from the Clintons?).

The Q & A with Democratic Senators showed Kavanaugh was an anger driven egomaniac whose attitude was right in line with a would-be rapist became impossible. Graham called an audible with an outburst worthy of the Young and the Restless over the mistreatment of Kavanaugh over a woman they all claimed to believe to a degree.

UPDATE – Kavanaugh seems to have plain ol’ lied about having no connection to Yale and was, in fact, a ‘legacy’ enrollment. Also- Yale’s pretty much disowned him.

With questions about hedonism and drunkenness it at times sounded like an intervention. Certainly when Kavanaugh made a series of baffling statements about his drinking.

Attacking people who asked any question he disliked, he really sounded like a drunk in denial. Ranting he only drinks beer was a constant refrain as he challenged and abused the Democrats like an angry idiot with no sense of appropriateness. Imagine a guy this angry with a few (dozen) in him?

The preposterous calendar he should have burned shows his poor judgement. The easy to interpret slang for any former 80s teen shows Caveman Kavanaugh drank til he puked all the time and boasted to himself about sex.

Some sleazy quotes that makes you wonder if the Yearbook committee had any kind of adult supervision,  paints a cave painting of a  gross, pornographic obsessed alcoholic Kavanaugh sort of Rape-Walking his way through high school puking all the time from extreme drunkenness….from beer though! 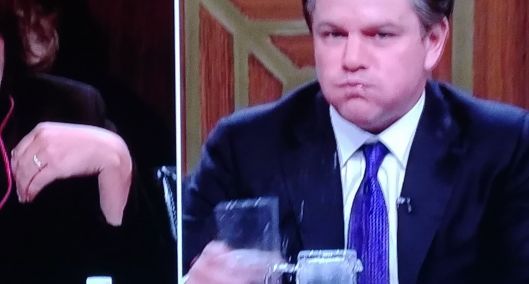 Swearing he was sure he absolutely remembers everything no one could actually adhere to – that he’d never forgotten anything while drinking- was sort of a laugher as was Kavanaugh’s Drunk Uncle moments of shouting about how much he likes beer. I wouldn’t have faulted him for simply saying “No one who has ever drank can say they remember everything just due to pure human memory. My first beer was forty years ago.”

While that wouldn’t have been great, but it would have been true and relatable. More relatable than the priestly image of studious dignity Kavanaugh presented of himself when he was introduced by Trump as the nominee weeks ago. It woukd also have been far more believable than the ‘heavy drinker with a weak stomach who puts ketchup on spaghetti’ line he tried to tell Senator Whitehouse, who didnt bite and questioned Kavanaugh’s quoting him out of context or completely fictionally and then returned to drinking related questions.

He saved exceptionally high levels of disrespect for female Senators like Feinstein and Senator Amy Klobuchar. The Klobuchar exchange was so ugly that Caveman Kavanaugh apologized after one of the many breaks.

The idea Kavanaugh might be a rapist was left hanging in the air but now it had company. New questions about state of mind, whether a man who cries and screams over little basketball in front of the senate and the nation on live TV, has the intellect or attitude for the Supreme Court Bench.

His list of crazy grievances were a channeling of Trumpist Insanity that makes you wonder if arrogant Kavanaugh’s privileged world view isn’t too narrow-minded and intolerant to sit in judgement of anyone.

At the end of all things, after a nationally painful elevator pitch to a hapless Jeff Flake by two impassioned sexual assault victims just bought too much to the surface for Flake not to make me a prophet yet again by helping the Democrats punch in a running Touchdown in the form of a week’s delay for a FBI investigation (which the White House already seems to be trying to sabotage).

The vote to approve the Caveman for Supreme Court seemed a done deal until  Flake’s moment of clarity bought the nation some time for the downfall to be complete and the flaming wreck of a man that is Kavanaugh to simply crash and explode behind a hill offscreen.  It was as dramatic a moment as any we’ve seen under this whacked out administration.

It doesn’t matter how narrow the Investigation is, the punked polaroid pictures of a drunken Kavanaugh from all ages of his life have started to surface and a lot of them look very real. Then there’s the other accusers that the FBI apparently won’t talk to, who will be on TV telling their story.

On the employment front- while still on the DC Bench for the moment, he probably isn’t allowed on campus while Harvard mulls over whether they will let him continue to work there.  So there’s something of a validation there. I’m pretty sure the DC Circuit job is an extremely endangered species in future Right Wing Satellite Radio host Brett Kavanaugh’s life.

Slammed by Yale as Unfit, now our Unfrozen Cro-Mag buddy has also been FIRED from Harvard! Outcry form students was part of it. Technically he quit (while hugely in debt BTW). No one was going to take part 2 of his class and be subjected to even academic Judgement from serial drunk anger addict. There’s people looking for money back and credits for being subjected to the guy in the first place and they might get it.  Presumably he’s gone for lack of integrity/ being a drunk/ being a danger to students. The DC Bench job will be gone in less than 12 months. I doubt hes ever allowed to see another case. Maybe he keeps his law license, but disbarment for a short period of time is looking likely. OR- he might still get jammed onto the SCOTUS bench, but it would be temporary.  Captain Caveman will have about 6 weeks of safety before calls to impeach

Was this Hearing Trump’s Pickett’s Charge?

Historians might just call the stalled Kavanaugh Nomination the High WaterMark of this rebellion.

The Trumpian waters may have crested. For a moment a Rubber Stamp Justice on the Court seemed a sure thing, but then it exploded and now is a zombie at best. Kavanaugh will be surely fail to make the cut after any investigation. If the investigation looks terrible it’s likely Flake’s conscience comes back into play.  After all, there are other terrible conservative judges who aren’t drunken assholes who would just get the gig.

I think the stipulations put on the Kavanaugh vote have doomed him, justifiably so, to not get on the Supreme Court. It may be remembered as the Picketts Charge of Trump’s Presidency. As I said, a high watermark that will not be reached again.

Like Robert E Lee’s Army of Northern Virginia, Trump likely remains dangerous, but Historians may well point to the failure of this nomination, now i would say assured, as the moment things started going against him.  He’s not winning anymore and he may mor be able to Un-Lose. Lee never really menaced the North with an invasion again. You could also analogize it to Stalingrad too I suppose as Trump is something of a Nazi.

I would be great if Saturday Night Live, returning tonight, brings back Horatio Sans as Drunk Uncle/ Kavanaugh for tonight’s 275th season premiere of SNL

UPDATE – well i was wrong on  SNL but Matt Damon CRUSHED it as a raging, “water” swilling, ‘Bad Will Hunting’ 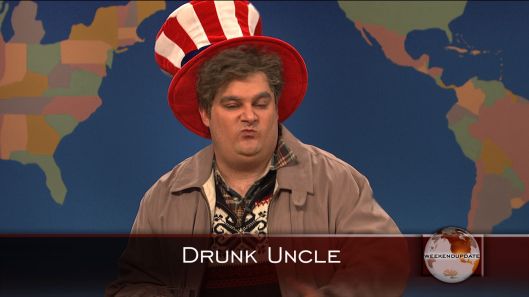